As part of the City Square House office development, Wellington Street has been given a colourful makeover with the unveiling of artwork inspired by local pupils at St Joseph’s Catholic Primary School in Hunslet. 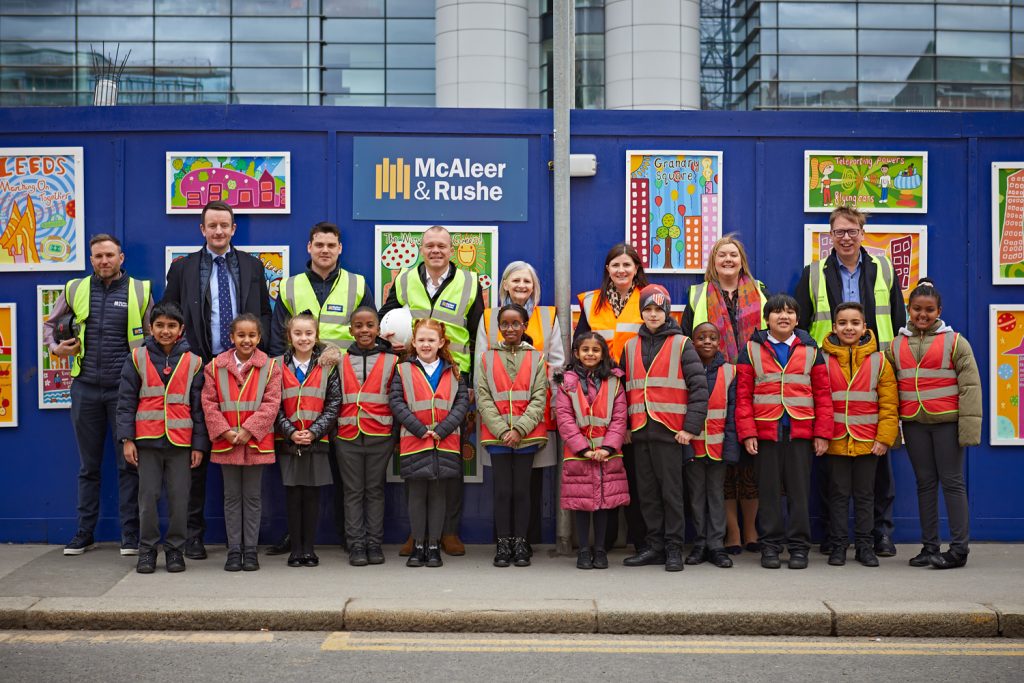 Developers MRP, and Global law firm DLA Piper, commissioned the community arts organisation Art4Space to curate the imaginative artwork with engagement from the school. Pupils were asked to explore the concept of ‘Leeds – City of the Future’ and what that would mean for Leeds and their community. The content of the artwork was developed in the form of drawings, doodles, words and quotes, which is now displayed as an outside public gallery on Wellington Street. The outside gallery will be for all to enjoy in the lead up to completion of the City Square House development in Autumn 2023. The artwork inspired by the children includes depictions of everyone being treated as equal, flying cars and skyscrapers that reach into space.

The theme of the gallery links into the wider aims of the development as the office of the future. The twelve-story City Square House will offer prime office space with low carbon credentials through a clever blend of technology including solar panels to be installed onto the roof, open plan design and access to fresh air with the inclusion of a number of terraces. Every aspect of the development is viewed through the lens of sustainability.

Angus Monteith, Development Director of MRP said: “City Square House is a workplace to inspire, not only for the occupiers moving in, but for the local community and the city of Leeds. It is great to see the arts project evoke creativity within the younger generation and introduce them to the world of Construction and the built environment. We look forward to welcoming the children on site to get a closer look once the superstructure of this 12-storey building rises from the ground.”

Andrew Clarke, Real Estate Partner at DLA Piper added: “It has been wonderful to collaborate with St Joseph’s and MRP on this special project. To share our excitement about our future home with the children and brighten Wellington Street with their creative ideas is fantastic. DLA Piper’s heritage is intertwined with the city of Leeds. Engaging with our local community is something that lies at the heart of our values.”

Ciara Munnelly, Acting Head of School at St Joseph’s Catholic Primary School in Hunslet commented: “ The children have really enjoyed being a part of this project, from taking part in the design workshops and exploring their ideas of what Leeds looks like as a city of the future; to seeing their creations brought to life. It’s been lovely to see how engaged the children are in learning about City Square House and that they have played a part in its story – something they can be very proud of.”